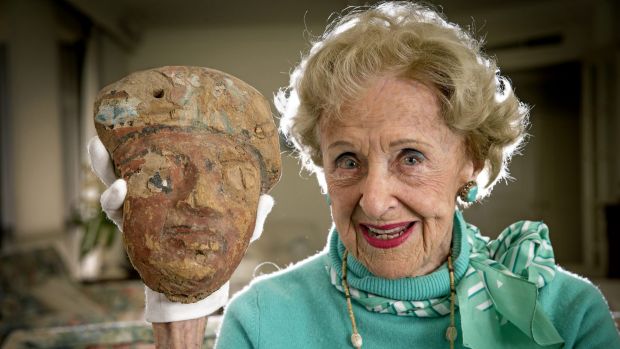 Ninety-five-year-old Joan Howard has been dubbed Indiana Joan by some after showing off her artefact collection estimated to be worth over one million dollars to the West Australian newspaper.

It has been suggested that Mrs Howard was able to gain access to archaeological sites in Syria, Egypt, Jordan, Lebanon, Israel and Palestine whilst travelling with her diplomat husband, Keith in the 1960’s and 1970’s. She is said to have volunteered on archaeological digs where she gained access to the artefacts. Her collection includes Neolithic axe heads, pottery and weapons from the Phoenicians and the Romans, coins, seals and jewellery from the time of the pharaohs, and a precious funerary mask from Egypt.

Monica Hanna of Egypt’s Heritage Taskforce posted an open letter to Australia’s Ambassador to Egypt Neil Hawkins on Facebook earlier this month demanding that an investigation into Mrs Howard’s collection take place. The Department of Foreign Affairs and Trade said it was investigating the matter and was obligated under UNESCO conventions to return foreign cultural property which had been illegally exported from their country of origin.