1916 The Battle of Fromelles begins 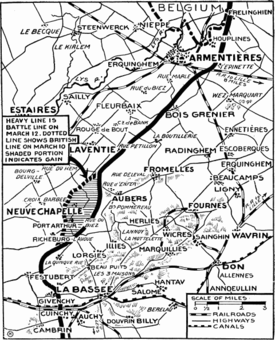 Fromelles was the first major battle fought by Australians on the Western front. Fromelles saw British and Australian troops attack the German lines in a prelude to the battle of the Somme.

The attackers had significantly underestimated the size of the German forces and found themselves outnumbered by a factor of 2:1. The Germans had approximately 30,000 troops on site whereas the combined British/Australian forces totalled somewhere between 10,000 and 15,000. The attack was intended primarily as a feint to draw German troops away from the Somme offensive then being pursued further to the south.

The battle did not go well for the allied forces with a total of 7,080 Allies being killed, 5,533 of which were Australians whereas the Germans only lost between 1,600 and 2,000 troops.