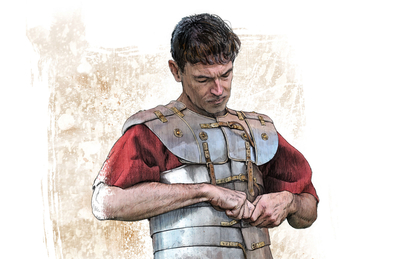 During the excavation activity at the Kalkriese park archaeologists came across an area with an unusually high concentration of finds. Due to the extreme summer temperatures it was decided to salvage the entire area and only excavate it later under laboratory-controlled conditions.

The block of earth was scanned using a variety of technologies and a large concentration of metal was found to be contained therein. The armour is currently being excavated from this block and is being restored. Due to the force exerted upon the armour by the weight of the earth the individual armour plates have been pressed together and need to be very carefully separated, currently only the plates from the shoulder and chest areas have been removed and some of those have already been restored.

These plates indicate a likely new variant of lorica segmentata which would be extremely exciting new discovery for those of us interested in the armour of this period. This find represents the best preserved and currently oldest known example of the lorica segmentata, which was constructed using overlapping metal plates, often described as rails, that were connected to one another by hinges and leather straps.

As the oldest and only nearly completely preserved lorica segmentata this find has the potential to provide new insights into Roman military technology.