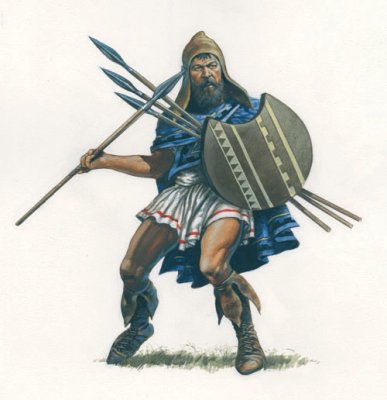 “The Thracians are the biggest nation in the world, next to the Indians; were they under one ruler, or united, they would in my judgement be invincible and the strongest nation on earth.”

The Thracians were made up of many tribes in the Balkans between the Danube and the Aegean, to the historian Herodotos they were the second most numerous people in the world and the threat they posed was only mitigated by the fact that they were not unified and posed no central authority. They were renowned as a warlike people who valued military prowess above the crafts of the artisan.  The Thracians had demonstrated their capabilities on the battlefield as is demonstrated by the ongoing popularity of Thracian mercenaries.

The Thracians were particularly well-known for their light cavalry and Peltast troops. Thracian Peltast warriors generally fought armed with javelins and were protected by a light wicker shield. The Thracian Peltast’s primary defence is often depicted in contemporary art as a hide covered crescent shaped shield known as a pelte though other shapes (circular and oval) are also known to have been used. These troops often possessed a secondary weapon the most common being the sica, a curved dagger but clubs and swords were not unheard of either.

Peltasts performed the role of skirmishers taking advantage of their mobility to run towards their enemy release their javelins and move out of harm’s way. Peltasts were cheap troops to field as they didn’t required the expensive equipment of their more heavily armoured and equipped contemporaries, and their mobility made them very useful on a battlefield, they could be used to hold difficult terrain, ambush enemy forces or engage in costly hit-and-run tactics. Thracian Peltasts were particularly well-regarded because of their ferocity in battle and the fact that they would engage in melee combat when necessary. Peltast troops had repeatedly demonstrated their effectiveness especially throughout the Peloponnesian wars when combined arms tactics started to be employed by some of the Greeks.

Cavalry seems to have been the other great Thracian strength. Thrace had some excellent horse rearing terrain, and horses certainly became an important part of the Thracian identity as is illustrated by the cult of the Thracian rider god. There is evidence to suggest that Thracian horses were larger than the nearby Steppe horses used by the Scythians. The Thracians were able to field a variety of cavalry types but seem to have favoured javelin throwing light cavalry. Webber advances an interesting theory for why there isn’t evidence of wider use of heavy cavalry, he suggests that the lack of centralisation in Thrace ensured that the individual tribal groupings although large enough to field cavalry forces were generally not large enough to be able to afford significant numbers of heavy cavalry that would have been a lot more costly.

According to Livy, even before the annexation of Macedonia in 146 BC the Thracians were considered by some Romans to be a greater threat to Roman control in the region than Macedonia itself was.