Weaponry of the Army of Phillip II of Macedon – the Sarissa 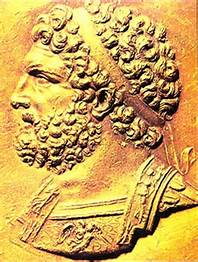 The sarissa was a long pike used by the infantry of Phillip II (King of Macedonia 359 – 336BC).

The infantry, known as the Macedonian phalanx, was ingeniously armed with a 4.5 to 6.5 metre pike (greek: sarissa) which was held in their right hand, and a shield (aspis) in their left.

As the phalanx advanced in formation, the sarissa was held pointed outward toward the advancing enemy. The second line held theirs titled forward also, and the third line tilted forward again and so on through the rows. The effect being a multitude of spaced spikes protecting the advancing phalanx from an oncoming enemy.

It was particularly effective against charging enemy cavalry as the sarissa could protrude a good 5-6 meters beyond the front line. Enemy men and horses could be brought down well before reaching the infantry body.

While it was Phillip that developed the sarissa armed phalanx formation, it was his son Alexander the Great that enjoyed the most success with its use … conquering the Persian Empire.

Use of the Sarissa on the Screen.

The use of the sarissa by infantry troops is widely replicated in film and television. Most recently seen in the Battle for Winterfell scenes in Season 6 of Game of Thrones. Ramsay Bolton’s infantry, armed with sarissai and shields, are filmed encasing Snow’s men with at least three lines deep. Snow’s men are unable to breach the sarissa line.

This post is dedicated to Minor Markle III. Minor was a world authority on the sarissa. My passion for Ancient Greek warfare was first inspired by my study of Minor’s research.