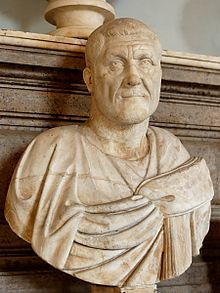 22 April – the Roman Senate outlaws the emperor Maximinus Thrax for carrying out bloodthirsty proscriptions in Rome.

Thrax had become Emperor in 235, his short three-year reign has been considered to mark the beginning of Rome’s crisis of the third century.

Proclaimed emperor by the Praetorian guard Thrax was never a popular choice with the Senate due to his ‘peasant’ origins. Apparently the Emperor felt the same way about the nobility, who he suspected of plotting against him.

Whilst wintering at Sirmium Thrax heard that he had been deposed by the Senate who had proclaimed Marcus Antonius Gordianus Sempronianus, Gordian I, and his son Gordian II as co-emperors who were at the time in Africa.

Gordian II was killed fighting in Carthage, after which Gordian I hanged himself with his belt, leaving the Senate vulnerable position as they had supported these two over Thrax.

The Senate knowing the precarious nature of their position decided to elevate two of their own number Pupienus and Balbinus as the new co-emperors. The people of Rome, did not approve of the new appointments as these men were clearly members of the patrician class. Their protests forced the new co-emperors to compromise by appointing Gordian III (Gordian’s grandson) Caesar.

Thrax marched on Rome to overthrow the Senate’s appointees it was assassinated in his camp in May 238.