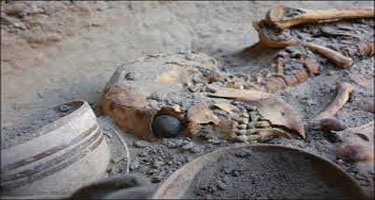 Archaeologists excavating an ancient necropolis at Shahr-i-Sokhta [“Burnt City”] in the Sistan desert have discovered that the first known prosthetic eye belonged to a Persian priestess 5000 years ago. The female soothsayer who stood 6′  tall, with a golden disk in place of her left eye  almost certainly would have used it to convince those who saw it that she could see into the future.

“It must have glittered spectacularly, conferring on the woman a mysterious and supernatural gaze,” said leader of the Italian team Lorenzo Costantini, adding,  “she must have been a very striking and exotic figure.”

The eyeball was made of a lightweight material determined to consist of a mixture of natural tar and animal fat. Lines had been engraved radiating from the iris and gold had been applied in a thin layer over the surface. A tiny hole had been drilled on each side of the half-sphere, which had a diameter of just over 1″, so that it could be held in place with thread. 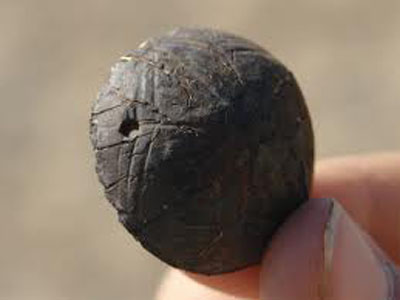