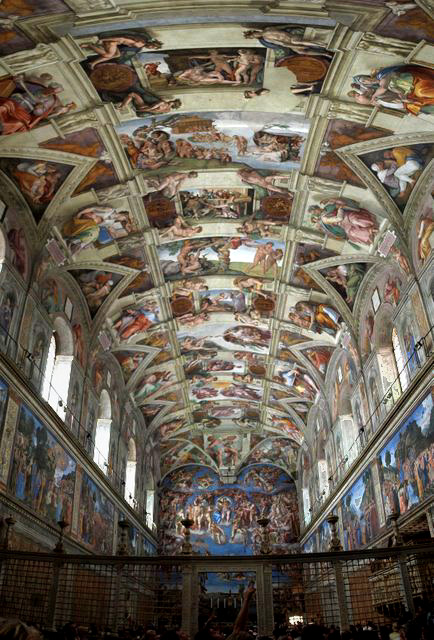 Pope Julius II celebrated All Saints Day mass in the Sistine chapel by allowing the public to see the ceiling painted by Michelangelo for the first time.

Michelangelo took at least 4 years to complete the Sistine chapel’s ceiling. He was originally commissioned to paint the twelve apostles  but negotiated with the Pope to paint a far more ambitious work which depicts nine stories taken from Genesis in addition to decorative figures and old testament prophets.

The scenes depicted are:

Michelangelo, who was primarily a sculptor, was initially reluctant to accept this commission but was apparently pressured into accepting, with the contract signed on 10 May 1508. Apparently the artist and his sponsor Pope Julius II argued about the work, with the Pope demanding Michelangelo finish more quickly.

The work has been considered a masterpiece ever since it was unveiled to the public. Michelangelo returned to the Sistine chapel later at the request of Pope Paul III to paint the last judgement behind the altar.