The Ides of March 44 BC – Caesar Assassinated 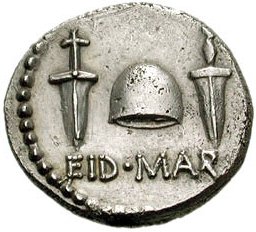 15 March 44 BC – On this day, which was known as the Ides of March to the Romans Julius Caesar was assassinated. In the Roman calendar the Ides of each month was sacred to the god Jupiter, the Ides occurred on the 13th for most months but the 15th for March, May, July and October. The Ides of March 44 BC are a particularly significant date as they mark a turning point in the history of Rome with Caesar’s assassination being one of the events that marks the transition from the Republican period to the imperial, and begins a Roman civil war.

Caesar who was seen by many to have been trying to establish a monarchy where he would rule Rome was stabbed to death at a Senate meeting, as many as 60 senators were involved in the conspiracy led by Brutus and Cassius.