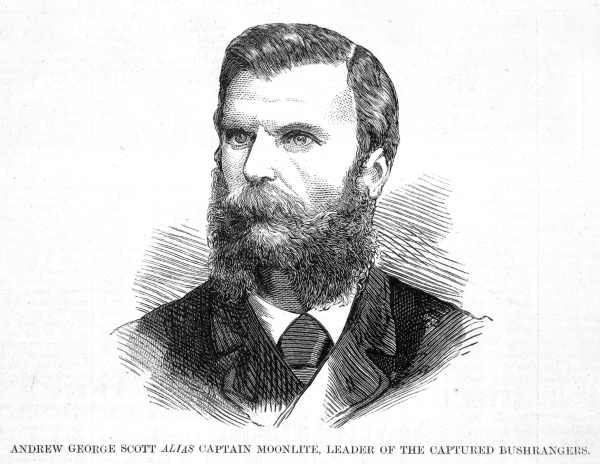 A.K.A Andrew George Scott moved from Ireland to New Zealand in 1861, where he joined the military during the Maori Wars as an officer he fought at the battle of Orakau where he was wounded in both legs. After an apparently over-long convalescence Scott was accused of malingering and courtmartialed. He presented the slaughter of women and children during the siege as the source of his objection to returning to service.

Having moved to Maitland, near Newcastle he was there convicted on two charges of obtaining money by false pretences for which he was sentenced to twelve and eighteen months’ imprisonment. Of these concurrent terms, Scott served fifteen months, after which he returned to Sydney where, in March 1872, he was arrested on the charge of robbing the Egerton Bank and forwarded to Ballarat for examination and trial.

He escaped goal by cutting a hole through the wall of his cell and freed five other men but was recaptured shortly after and sentenced to 10 years goal. He was released in March 1879.

After a short period of seemingly law-abiding life Scott formed a gang of bushrangers near Mansfield, in Victoria. Scott robbed the Australian Arms Hotel near Wagga Wagga of a large quantity of alcohol and took prisoner the residents of some other neighbouring properties- bringing the number of prisoners to 25 in total. Scott was captured after a gunfight with 9 troopers and was hanged on the 20th January 1880.