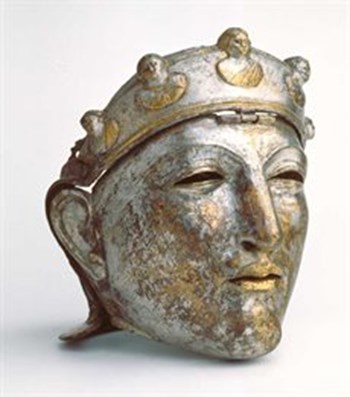 This face helmet of a rider from the Roman era was purchased in 1915 by the Nijmegen collector Gerard Marius Kam. The helmet was in that year, or shortly before, are dredged from the river Waal at Nijmegen, close to the southern shore west of the railway bridge.

The helmet, of which the iron has been largely lost due to corrosion, is coated with brass bearing traces of encashment over the whole surface. In some places remains set of gilding: the lips, the edges of the eyelids, the two trims of the forehead band and the clothing and hair of them expelled figuren.De driven iron helmkap in the form of a head of hair with locks, is almost completely disappeared. Helmkap and face mask are connected to each other with a hinge, so that the mask could be folded up.The neck guard is lined with tin plated brass, which has been beaten to the iron along the edge. Probably for the adhesion of the tongue to the iron used is an organic adhesive. Among the ears are rivets for fixing a leather belt over the neck guard, by which the mask at the bottom with the helmet was connected.

Above each ear with rivets a guard. Between them is a richly decorated head band of silver-plated brass, which was attached to the iron rivets. In this band are five busts driven, the clothes and the hair are gold plated. Probably these figures belong to the circle around the Bacchus. The beautifully decorated equestrian helmet dates from the second half of the 1st century AD.Presumably this 1st century face helmets are primarily used as a battle helmet. The relatively large openings for eyes, nose and mouth make face helmet very suitable to wear during the fight. But they are also worn during parades, tournaments and ceremonial occasions, where riders could show their skills.

Possibly the helmet during the rebellion of the Batavians or shortly thereafter ended up in the river. On the inside of the helmet were two cheek valves of a helmet and other single blue glass beads and bronze washers caked;perhaps all along been in a pocket. The helmet will not accidentally hit the water, but filed with certain intentions in the river. The deposition of pieces of military equipment and other bronze objects in rivers has a long tradition which also continued in Roman times. A large number of the Roman-known helmets is found in the water. It is not likely that they are all gone lost while crossing a river. Perhaps sacrificed soldiers at the end of their service to their most valuable pieces of equipment to the god who protected them during the service in order thus again be able to receive a favor of that deity.