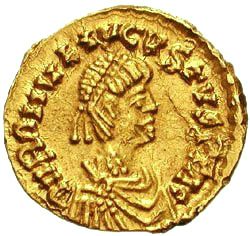 Romulus Augustus (born c. AD 461 – died after AD 476, and was apparently still alive as late as 507) was an emperor (alleged usurper) reigning over the Western Roman Empire from 31 October AD 475 until 4 September AD 476. His deposition by Odoacer traditionally marks the end of the Western Roman Empire, the fall of ancient Rome, and the beginning of the Middle Ages in Western Europe.

He is mostly known by his nickname “Romulus Augustulus“, though he ruled officially as Romulus Augustus. The Latin suffix -ulus is a diminutive; hence, Augustulus effectively means “Little Augustus”.

The historical record contains few details of Romulus’s life. He was proclaimed as emperor by his father Orestes, the magister militum (master of soldiers) of the Roman army after forcing Emperor Julius Nepos to leave Italy. Romulus, little more than a child, acted as a figurehead for his father’s rule and reigned for only ten months. His legitimacy and authority were disputed beyond Italy and Romulus was soon deposed by Odoacer, who had defeated and executed Orestes. Odoacer sent Romulus to live in the Castellum Lucullanum in Campania, after which he disappears from the historical record.