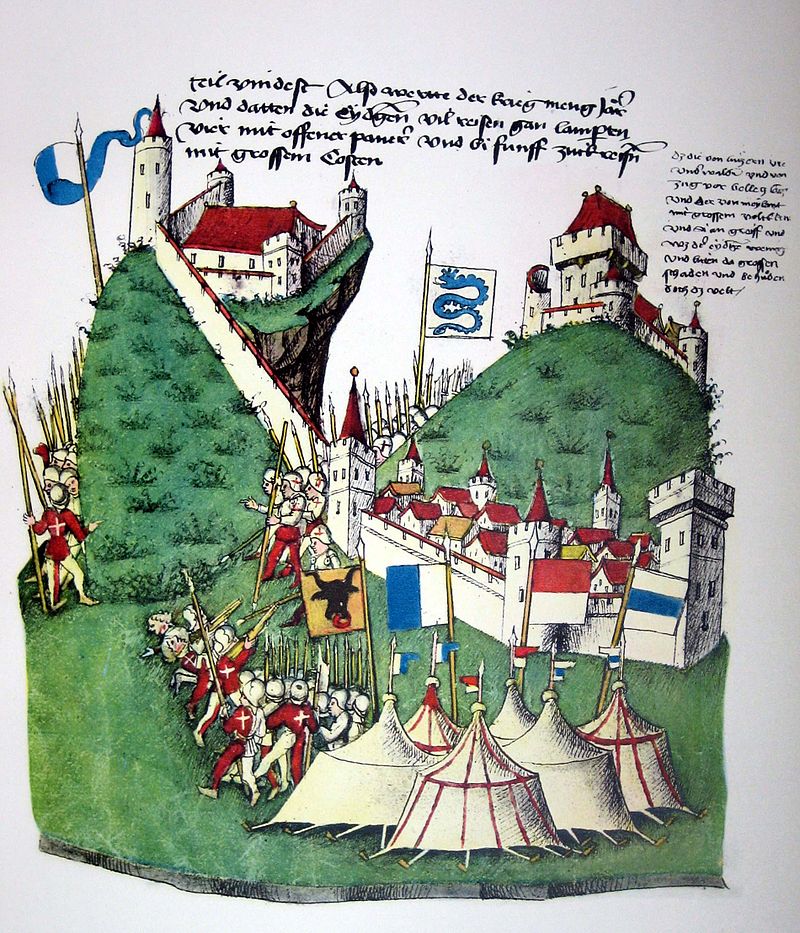 The Battle of Arbedo was fought on this day in 1422 between the Duchy of Milan and the Swiss Confederation.

In 1419 the Swiss Cantons of Uri and Unterwalden bought the Bellinzona stronghold from the Sacco barons, but were unable to defend it adequately. When, in 1422, they rejected the Milanese proposal to buy back the fortified town, their troops stationed in Bellinzona were put to rout by the Visconti (Milanese) army under the command of Francesco Bussone, called Il Carmagnola. An attempt to reconquer the fortified area with the support of other confederates led to the battle at Arbedo, a village 3 km north of Bellinzona. The Count of Carmagnola led the forces of the Duchy of Milan against the Swiss.

The Swiss were mainly equipped with halberds and had an initial success against the Lombard cavalry charge. Then Carmagnola brought his crossbowmen forward, while dismounting his cavalry. The dismounted men-at-arms used pikes which outreached the halberds. The Swiss were put further under pressure by crossbow fire on the flanks. The Milanese force began to push back the Swiss, who were only saved from total disaster by the appearance of a band of foragers, whom the Milanese were convinced represented a major new force. When the Milanese force pulled back to reform, the Swiss fled the battlefield, having taken heavy casualties.

The victory secured Bellinzona and the Leventina to the Duchy. In addition the Duchy gained the Val d’Ossola, thus the Swiss lost all the territorial gains they had made in the purchase of 1419. The defeat discouraged the Swiss expansionist intentions towards Lake Maggiore for a long time. It was the defeat at Arbedo that made the Swiss increase the number of pikemen within their forces.