The origin of the Olympic flame 776BC 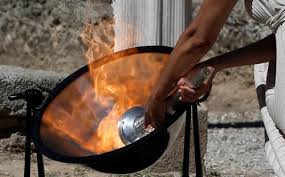 First settled around 3000BC the sacred ground of Olympia on the Peloponnese peninsula in Greece, is believed to have become the stage for the first Ancient Olympic Games in 776BC.

Fire was considered a sacred element by the Ancient Greeks and burned at temples on the site in honour of the gods. The Olympic flame tradition originates from Greek Myth: Prometheus, a Titan and elder god, stole the fire of Zeus – head of the younger Olympian gods of Mount Olympus.

To honour the Olympian gods, the flame was lit from the sun to ensure its religious purity at the temple of the goddess Hera, the wife and sister of Zeus.

The ancient ritual of lighting the flame continues as a tradition of the modern Olympic Games, an extraordinary 2792 years after the first Ancient Olympic Games was said to be held.