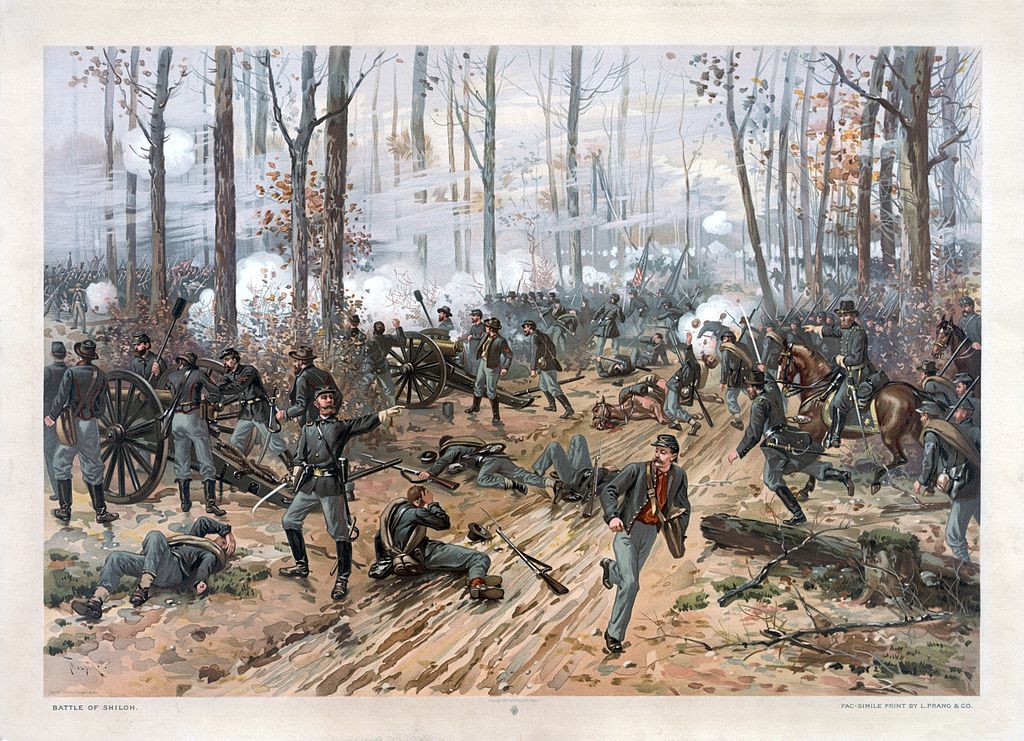 The Battle of Shiloh, also known as the Battle of Pittsburg Landing, was a major battle in the Western Theater of the American Civil War, fought 6-7 April 1862, in south western Tennessee.

A Union army under Major General Ulysses S. Grant had moved via the Tennessee River deep into Tennessee and was encamped principally at Pittsburg Landing, Tennessee on the west bank of the river, where Confederate forces under Generals Albert Sidney Johnston and Pierre G. T. Beauregard launched a surprise attack on Grant’s army. Johnston was killed in action during the fighting; Beauregard, who thus succeeded to command of the army, decided against pressing the attack late in the evening. Overnight Grant received considerable reinforcements from another Union army under Maj. Gen. Don Carlos Buell, allowing him to launch an unexpected counterattack the next morning which completely reversed the Confederate gains of the previous day.

On 6 April, the first day of the battle, the Confederates struck with the intention of driving the Union defenders away from the river and into the swamps of Owl Creek to the west. Johnston hoped to defeat Grant’s Army of the Tennessee before the anticipated arrival of General Don Carlos Buell’s Army of the Ohio. The Confederate battle lines became confused during the fierce fighting, and Grant’s men instead fell back to the northeast, in the direction of Pittsburg Landing. A Union position on a slightly sunken road, nicknamed the “Hornet’s Nest”, defended by the men of Brig. Gens. Benjamin M. Prentiss’s and William H. L. Wallace’s divisions, provided critical time for the remainder of the Union line to stabilize under the protection of numerous artillery batteries. Wallace was mortally wounded at Shiloh, while Prentiss was eventually surrounded and surrendered. General Johnston was shot in the leg and bled to death while personally leading an attack. Beauregard, his second in command, acknowledged how tired the army was from the day’s exertions and decided against assaulting the final Union position that night.

Reinforcements from Buell’s army and a division of Grant’s army arrived in the evening of the 6th and helped turn the tide the next morning, when the Union commanders launched a counterattack along the entire line. Confederate forces were forced to retreat from the area, ending their hopes of blocking the Union advance into northern Mississippi. The Battle of Shiloh was the bloodiest battle in American history up to that time, although it was superseded the next year by the Battle of Chancellorsville and, soon after, the three-day Battle of Gettysburg, which would prove to be the bloodiest of the war.