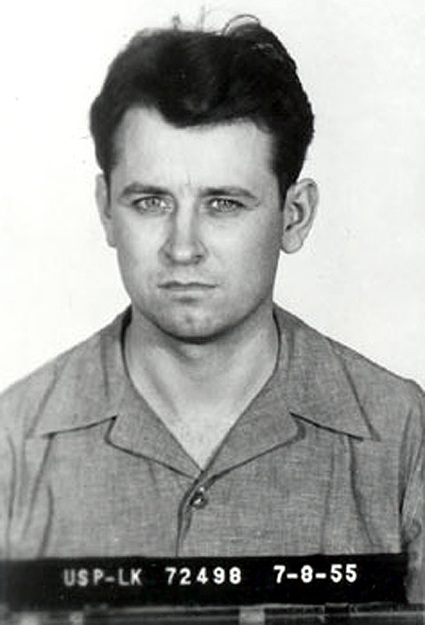 James Earl Ray (10 March 1928 – 23 April 1998) was an American convicted of the assassination of civil rights leader Martin Luther King, Jr. Ray was convicted on his 41st birthday after entering a guilty plea to forgo a jury trial. Had he been found guilty by jury trial, he would have been eligible for the death penalty. He was sentenced to 99 years in prison. He later recanted his confession and tried unsuccessfully to gain access to a retrial. In 1998, Ray died in prison of complications due to chronic hepatitis C infection.

On 5 March 1968, Ray underwent a facial reconstruction (rhinoplasty), performed by Dr. Russell Hadley. On 18 March 1968, Ray left Los Angeles and began a cross-country drive to Atlanta, Georgia. Arriving in Atlanta on 24 March, Ray checked into a rooming house. He eventually bought a map of the city. FBI agents later found this map when they searched the room in which he was staying in Atlanta. On the map, the locations of the church and residence of Martin Luther King Jr. were circled.

Ray was soon on the road again, and drove his Mustang to Birmingham, Alabama. There, on 30 March, he bought a Remington Model 760 Gamemaster .30-06-caliber rifle and a box of 20 cartridges from the Aeromarine Supply Company. He also bought a Redfield 2x-7x scope, which he had mounted to the rifle. He told the store clerks that he was going on a hunting trip with his brother. Ray had continued using the Galt alias after his stint in Mexico, but when he made this purchase, he gave his name as Harvey Lowmeyer.

After buying the rifle and accessories, Ray drove back to Atlanta. An avid newspaper reader, Ray passed his time reading the Atlanta Constitution. The paper reported King’s planned return trip to Memphis, Tennessee, which was scheduled for 1 April. On 2 April, 1968, Ray packed a bag and drove to Memphis.

Martin Luther King was fatally wounded by a single rifle bullet on 4 April 1968, while standing on the second-floor balcony of the Lorraine Motel in Memphis, Tennessee. Shortly after the shot was fired, witnesses saw a man believed to be James Earl Ray fleeing from a rooming house across the street from the Lorraine Motel. Ray had been renting a room in the house at the time. A package was dumped close to the site that included a rifle and a binocular, both found with Ray’s fingerprints.

On the day of the assassination, Ray fled north by car from Memphis to Canada, arriving in Toronto, Ontario three days later, where he hid out for over a month and acquired a Canadian passport under the false name of Ramon George Sneyd. He left Toronto in late May on a flight to England. On 8 June 1968, a little more than two months after King’s death, Ray was arrested at London’s Heathrow Airport while trying to leave the United Kingdom on the false Canadian passport. At check-in, the ticket agent noticed the name on his passport—Sneyd—was on a Royal Canadian Mounted Police watchlist. At the airport, officials noticed that Ray carried another passport under a second name. The UK quickly extradited Ray to Tennessee, where he was charged with King’s murder. He confessed to the crime on 10 March 1969, his 41st birthday, and after pleading guilty he was sentenced to 99 years in prison.