The name Titanic was derived from Greek mythology and meant gigantic. Built in Belfast, Ireland, in the United Kingdom of Great Britain and Ireland (as it was then known), the RMS Titanic was the second of the three Olympic-class ocean liners—the first was the RMS Olympic and the third was the HMHS Britannic. They were by far the largest vessels of the British shipping company White Star Line’s fleet, which comprised 29 steamers and tenders in 1912. The three ships had their genesis in a discussion in mid-1907 between the White Star Line’s chairman, J. Bruce Ismay, and the American financier J. P. Morgan, who controlled the White Star Line’s parent corporation, the International Mercantile Marine Co. (IMM).

The sheer size of Titanic and her sister ships posed a major engineering challenge for Harland and Wolff; no shipbuilder had ever before attempted to construct vessels this size. The ships were constructed on Queen’s Island, now known as the Titanic Quarter, in Belfast Harbour. Harland and Wolff had to demolish three existing slipways and build two new ones, the largest ever constructed up to that time, to accommodate both ships. Their construction was facilitated by an enormous gantry built by Sir William Arrol & Co., a Scottish firm responsible for the building of the Forth Bridge and London’s Tower Bridge. The Arrol Gantry stood 228 feet (69 m) high, was 270 feet (82 m) wide and 840 feet (260 m) long, and weighed more than 6,000 tons. It accommodated a number of mobile cranes. A separate floating crane, capable of lifting 200 tons, was brought in from Germany.

The construction of Olympic and Titanic took place virtually in parallel, with Olympic‘s hull laid down first on 16 December 1908 and Titanic‘s on 31 March 1909. Both ships took about 26 months to build and followed much the same construction process. They were designed essentially as an enormous floating box girder, with the keel acting as a backbone and the frames of the hull forming the ribs. At the base of the ships, a double bottom 5 feet 3 inches (1.60 m) deep supported 300 frames, each between 24 inches (61 cm) and 36 inches (91 cm) apart and measuring up to about 66 feet (20 m) long. They terminated at the bridge deck (B Deck) and were covered with steel plates which formed the outer skin of the ships. 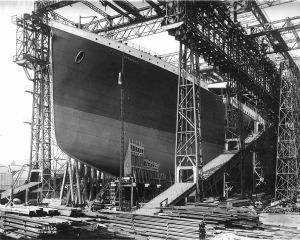 The 2,000 hull plates were single pieces of rolled steel plate, mostly up to 6 feet (1.8 m) wide and 30 feet (9.1 m) long and weighing between 2.5 and 3 tons. Their thickness varied from 1 inch (2.5 cm) to 1.5 inches (3.8 cm). The plates were laid in a clinkered (overlapping) fashion from the keel to the bilge. Above that point they were laid in the “in and out” fashion, where strake plating was applied in bands (the “in strakes”) with the gaps covered by the “out strakes”, overlapping on the edges. Commercial oxy-fuel and electric arc welding methods, ubiquitous in fabrication today, were still in their infancy; like most other iron and steel structures of the era, the hull was held together with over three million iron and steel rivets, which by themselves weighed over 1,200 tons. They were fitted using hydraulic machines or were hammered in by hand. In the 1990s some material scientists concluded that the steel plate used for the ship was subject to being especially brittle when cold, and that this brittleness exacerbated the impact damage and hastened the sinking. It is believed that, by the standards of the time, the steel plate’s quality was good, not faulty, but that it was inferior to what would be used for shipbuilding purposes in later decades, owing to advances in the metallurgy of steelmaking. As for the rivets, considerable emphasis has also been placed on their quality and strength.

One of the last items to be fitted on Titanic before the ships launch was her two side anchors and one centre anchor. The anchors themselves were a challenge to make with the centre anchor being the largest ever forged by hand and weighing nearly sixteen tons. Twenty Clydesdale draught horses were needed to haul the centre anchor by wagon from the Noah Hingley & Sons Ltd forge shop in Netherton, near Dudley, United Kingdom to the Dudley railway station two miles away. From there it was shipped by rail to Fleetwood in Lancashire before being loaded aboard a ship and sent to Belfast.

The work of constructing the ships was difficult and dangerous. For the 15,000 men who worked at Harland and Wolff at the time, safety precautions were rudimentary at best; a lot of the work was dangerous and was carried out without any safety equipment like hard hats or hand guards on machinery. As a result, deaths and injuries were to be expected. During Titanic‘s construction, 246 injuries were recorded, 28 of them “severe”, such as arms severed by machines or legs crushed under falling pieces of steel. Six people died on the ship herself while she was being constructed and fitted out, and another two died in the shipyard workshops and sheds. Just before the launch a worker was killed when a piece of wood fell on him.

Despite Titanic being virtually similar to the class’s lead ship Olympic, a few changes were made to distinguish both ships. The most noticeable of these was that Titanic (and the third vessel in class Britannic) had a steel screen with sliding windows installed along the forward half of the A Deck promenade. This was installed as a last minute change at the personal request of Bruce Ismay, and was intended to provide additional shelter to first class passengers. These changes made Titanic slightly heavier than her sister, and thus she could claim to be the largest ship afloat. The work took longer than expected due to design changes requested by Ismay and a temporary pause in work occasioned by the need to repair Olympic, which had been in a collision in September 1911. Had Titanic been finished earlier, she might well have missed her collision with an iceberg.