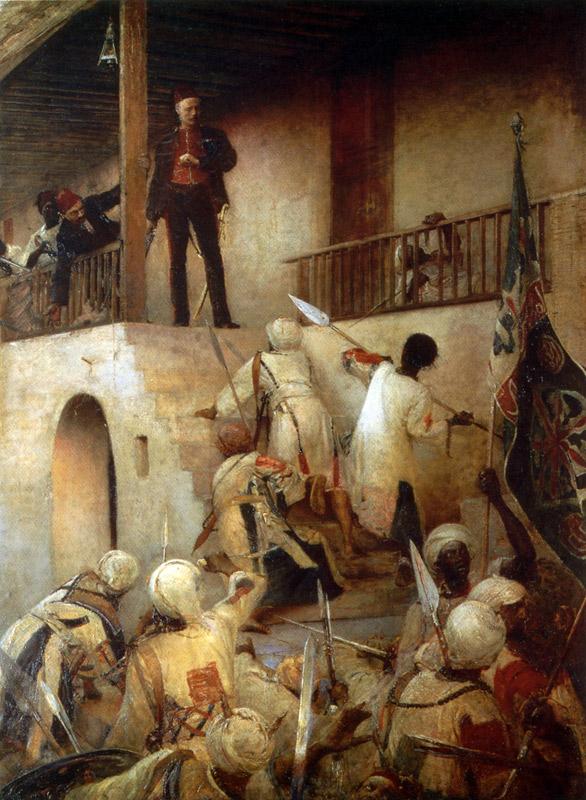 Fall of Khartoum was the conquest of Egyptian held Khartoum by the Mahdist forces led by Muhammad Ahmad. After a siege of almost a year from 13 March, 1884, to 26 January, 1885 the Mahdist army stormed the city.

Gordon’s plight excited great concern in the British press, and even Queen Victoria intervened on his behalf. The government ordered him to return, but Gordon refused, saying he was honour-bound to defend the city. By July 1884, Gladstone reluctantly agreed to send an expedition to Khartoum. The expedition, led by Sir Garnet Wolseley, took several months to organise and only entered Sudan in January 1885, but by then the situation of the besieged had become desperate, with food supplies running low, many inhabitants dying of hunger and the defenders’ morale at its lowest.

The relief expedition was attacked at Abu Klea on 17 January, and two days later at Abu Kru. Though their square was broken at Abu Klea, the British managed to repel the Mahdists. The Mahdi, hearing of the British advance, decided to press the attack on Khartoum. On the night of January 25–26, an estimated 50,000 Mahdists attacked the city wall just before midnight. The Mahdists took advantage of the low level of the Nile, actually crossing it on foot, and rushed around the wall on the shores of the river and into the town.

The details of the final assault are vague, but it is said that by 3:30 am, the Mahdists managed to concurrently outflank the city wall at the low end of the Nile while another force, led by Al Nujumi, broke down the Massalamieh Gate despite taking some casualties from mines and barbed wire obstacles laid out by Gordon’s men. The entire garrison, physically weakened by starvation, offered only patchy resistance and were slaughtered to the last man within a few hours, as were 4,000 of the town’s inhabitants, while many others were carried into slavery.

Accounts differ as to how Gordon was killed. According to one version, when Mahdist warriors broke into the governor’s palace, Gordon came out in full uniform, and, after disdaining to fight, he was speared to death in defiance of the orders of the Mahdi, who had wanted him captured alive. In another version, Gordon was recognised by Mahdists while making for the Austrian consulate and shot dead in the street. The most detailed account of his death was given by his bodyguard Khaleel Aga Orphali when he was debriefed by English officers in 1898, after the reconquest by Kitchener. According to Orphali, Gordon died fighting on the stairs leading from the first floor of the west wing of the palace to ground level where the attackers stood. He got seriously wounded by a spear that hit him in the left shoulder. Together with Orphali Gordon fought on with his pistol and sword and was hit by another spear.

“With his life’s blood pouring from his breast […] he fought his way step by step, kicking from his path the wounded and dead dervishes […] and as he was passing through the doorway leading into the courtyard, another concealed dervish almost severed his right leg with a single blow.”

Soon after that, Orphali was knocked unconscious and when he woke up several hours later he found Gordon’s decapitated body near to him. After Gordon’s head was cut off, it was brought to Omdurman where it was shown to Rudolph von Slatin, one of the Mahdi’s prisoners. After it was shown to Slatin the head was brought to the Mahdi. According to some sources his body was dumped in the Nile. After the reconquest various attempts were made to locate Gordon’s remains.

Advance elements of the relief expedition arrived within sight of Khartoum two days later. After the fall of the city, the surviving British and Egyptian troops withdrew from the Sudan, with the exception of the city of Suakin on the Red Sea coast and the Nile town of Wadi Halfa at the Egyptian border, leaving Muhammad Ahmad in control of the entire country.

After his victory, Muhammad Ahmad became the ruler of most parts of what is now Sudan, and established a religious state, the Mahdiyah, which was governed by a harsh enforcement of Sharia law. He died shortly afterwards, possibly from typhoid, in June 1885, though the state he founded survived him. Following a string of mostly disastrous battles in the years to come, as well as complex international events that would compel further colonial interests throughout Africa, the Anglo-Egyptian forces would steadily regain their control over Sudan. Fourteen years after their great conquest of Khartoum, at the Battle of Umm Diwaykarat, the Sudanese Mahdist rebellion was finally extinguished and the Mahdist War was over.

In the immediate aftermath of the Mahdist victory, the joy in the Mahdist camp was contrasted by consternation in Great Britain and Egypt. The British press put the blame of Gordon’s death on Gladstone, who was charged with excessive slowness in sending relief to Khartoum. He was rebuked by Queen Victoria in a telegram which became known to the public. His government fell in June 1885, though he was back in office the next year. The public outcry soon weakened, first when press coverage and sensationalism of the events began to diminish and secondly when the government released details of the £11.5 million military budget cost for pursuing war in the Sudan.

In reality, Gladstone had always viewed the Egyptian-Sudanese imbroglio with distaste and had felt some sympathy for the Sudanese striving to throw off the Egyptian colonial rule. He once declared in the House of Commons: “Yes, those people are struggling to be free, and they are rightly struggling to be free.” Also, Gordon’s arrogant and insubordinate manner did nothing to endear him to Gladstone’s government.

In Britain, Gordon came to be seen as a martyr and a hero. In 1896, an expedition led by Horatio Herbert Kitchener was sent to avenge his death (who swore to do so upon hearing of Gordon’s demise) and reconquer Sudan. On 2 September 1898 Kitchener’s troops defeated the bulk of the Mahdist army at the Battle of Omdurman. Two days later a memorial service for Gordon was held in front of the ruins of the palace where he had died. Surviving family members of the movement’s leaders were held by the British in a prison in Egypt. The women and children were held there for ten years. The men were held for twelve years. After their return to Sudan they were held under house arrest for the rest of their lives.