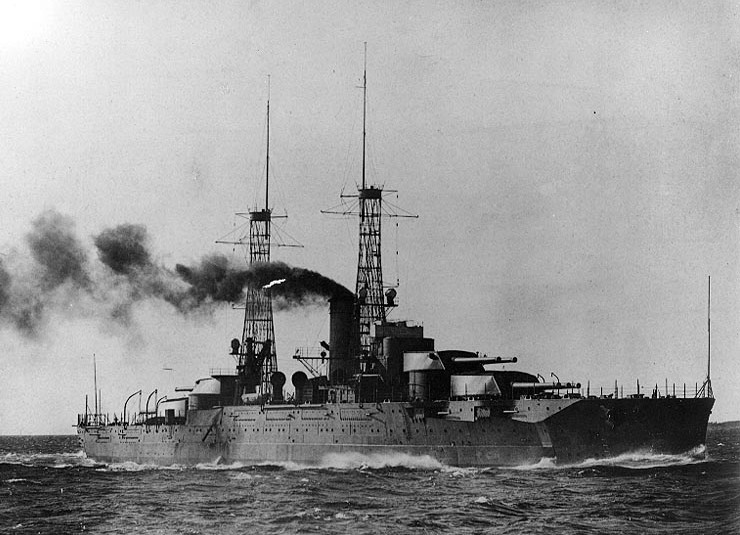 USS Nevada (BB-36), the second United States Navy ship to be named after the 36th state, was the lead ship of the two Nevada-class battleships; her sister ship was Oklahoma. Launched in 1914, the Nevada was a leap forward in dreadnought technology; four of her new features would be included on almost every subsequent US battleship: triple gun turrets, oil in place of coal for fuel, geared steam turbines for greater range, and the “all or nothing” armour principle. These features made Nevada the first US Navy “super-dreadnought”.

Nevada served in both World Wars: during the last few months of World War I, Nevada was based in Bantry Bay, Ireland, to protect the supply convoys that were sailing to and from Great Britain. In World War II, she was one of the battleships trapped when the Japanese attacked Pearl Harbour. She was the only battleship to get under way during the attack, making the ship “the only bright spot in an otherwise dismal and depressing morning” for the United States. Still, she was hit by one torpedo and at least six bombs while steaming away from Battleship Row, forcing her to be beached.

Subsequently salvaged and modernized at Puget Sound Navy Yard, Nevada served as a convoy escort in the Atlantic and as a fire-support ship in four amphibious assaults: the Normandy Landings and the invasions of Southern France, Iwo Jima, and Okinawa.

At the end of World War II, the Navy decided that Nevada was too old to be retained, so they assigned her to be a target ship in the atomic experiments that were going to be conducted at Bikini Atoll in July 1946 (Operation Crossroads). After being hit by the blast from the first atomic bomb, Able, she was still afloat but heavily damaged and radioactive. She was decommissioned on 29 August 1946 and sunk during naval gunfire practice on 31 July 1948.