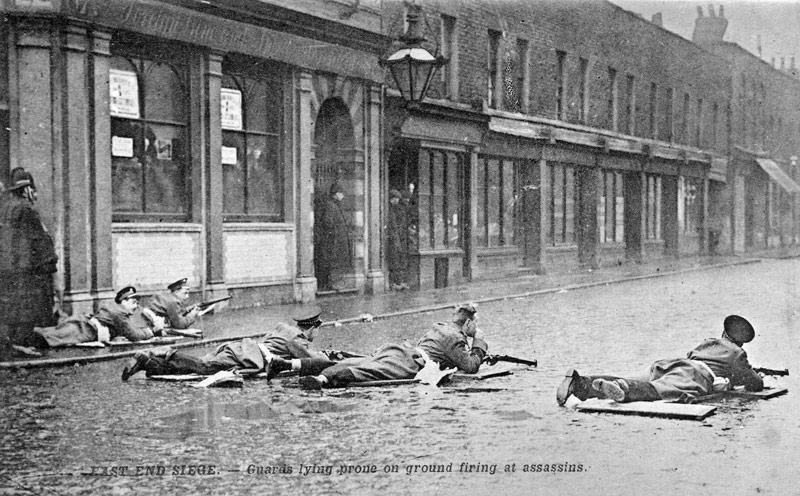 The Siege of Sidney Street, popularly known as the “Battle of Stepney“, was a notorious gunfight in London’s East End on this day in 1911. Preceded by the Houndsditch murders in December 1910 where three police officers and one gang member were shot dead, it ended with the deaths of two members of a politically motivated gang of burglars and international anarchists supposedly led by Peter Piatkow, a.k.a. “Peter the Painter”, and sparked a major political row over the involvement of the then Home Secretary, Winston Churchill.

On 2 January 1911, an informant told police that two or three members of the gang – possibly including the gang’s leader, Peter the Painter – were hiding at 100 Sidney Street, Stepney (in the Metropolitan Police district). Worried that the suspects were about to flee, and expecting heavy resistance from the anarchists to any attempt at capture, on 3 January 200 police officers cordoned off the area and the siege began. At dawn, the battle commenced.

The defenders, though heavily outnumbered, possessed superior weapons and great stores of ammunition. A detachment of Scots Guards from the Tower of London was sent to assist the police, and word got to the Home Secretary, Winston Churchill, who arrived on the spot to observe the incident at first hand, and to offer advice. Six hours into the battle, and just as the 13-pounder field artillery pieces that Churchill had authorised arrived, a fire began to consume the building. When the fire brigade arrived, Churchill refused them access to the building until the firing from inside stopped. The police stood ready, guns aimed at the front door, waiting for the men inside to attempt their escape. The door never opened. Instead, the remains of two members of the gang, Fritz Svaars and William Sokolow (both were also known by numerous aliases), were later discovered inside the building. No sign of Peter the Painter was found. Besides the three policemen, a London firefighter, Charles Pearson, also died after debris fell from an upper storey.