1963 – Vietnam War: The Viet Cong wins its first major victory in the Battle of Ap Bac 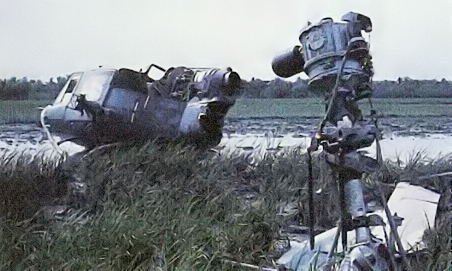 The Battle of Ấp Bắc was a major battle fought on this day in 1963, during the Vietnam War. It was fought in Định Tường Province (now part of Tiền Giang Province), South Vietnam.

On 28 December, 1962, US intelligence detected the presence of a radio transmitter along with a sizeable force of National Front for the Liberation of South Vietnam (NLF/Viet Cong) soldiers, reported to number around 120, in the hamlet of Ap Tan Thoi in Dinh Tuong Province, home of the Army of the Republic of South Vietnam (ARVN) 7th Infantry Division. To destroy the NLF force, the South Vietnamese and their US advisers planned to attack Ap Tan Thoi from three directions by using two provincial Civil Guard battalions and elements of the 11th Infantry Regiment, ARVN 7th Infantry Division. The infantry units would be supported by artillery, M-113 armored personnel carriers and helicopters.

On the morning of 2 January, 1963, the South Vietnamese Civil Guards spearheaded the attack by marching toward Ap Tan Thoi from the south. However, when they reached the hamlet of Ap Bac, which is situated southeast of Ap Tan Thoi, they were immediately pinned down by elements of the Viet Cong 261st Battalion. Shortly afterwards, three companies of the 11th Infantry Regiment were committed into battle in northern Ap Tan Thoi, but they too could not overcome the NLF soldiers who had entrenched themselves in the area. Just before midday, further reinforcements were flown in from Tan Hiep. The fifteen US helicopters ferrying the troops were riddled by Viet Cong gunfire and five helicopters were lost as a result.

The ARVN 4th Mechanized Rifle Squadron was then deployed to rescue the South Vietnamese soldiers and US aircrews who were trapped in the southwestern end of Ap Bac, but its commander was highly reluctant about moving heavy M-113 carriers across the local terrain. Ultimately, their presence made little difference as the NLF stood their ground and killed more than a dozen South Vietnamese M-113 crew members in the process. Late in the afternoon, the ARVN 8th Airborne Battalion was dropped onto the battlefield and in a scene that characterized much of the day’s fighting; the paratroopers were pinned down and could not break the NLF’s line of defence. Under the cover of darkness the Viet Cong withdrew from the battlefield, having won their first major victory. 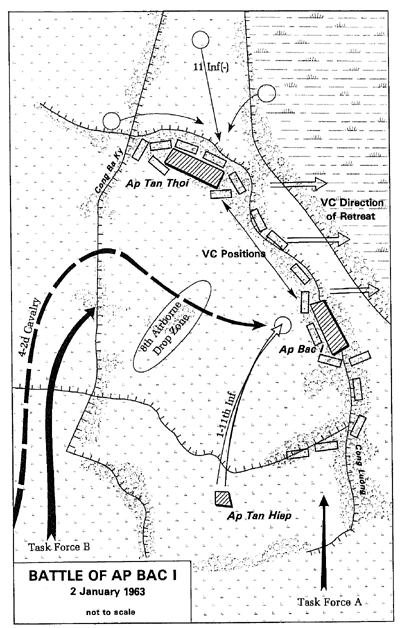