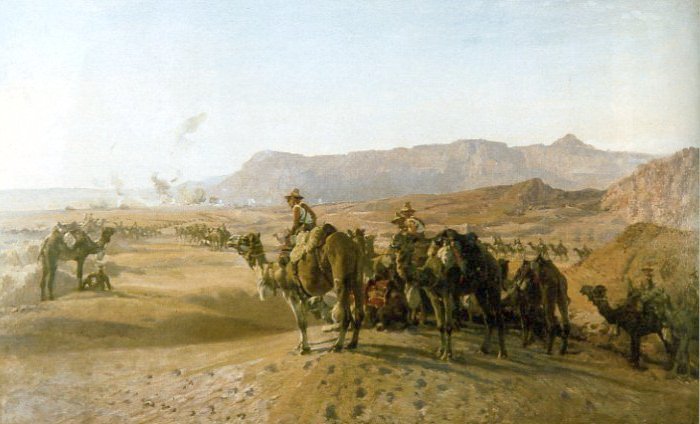 The Battle of Magdhaba took place on this day in 1916 during the Defence of Egypt section of the Sinai and Palestine Campaign in the First World War. The attack by the Anzac Mounted Division took place against an entrenched Ottoman Army garrison to the south and east of Bir Lahfan in the Sinai desert, some 18–25 miles (29–40 km) inland from the Mediterranean coast. This Egyptian Expeditionary Force (EEF) victory against the Ottoman Empire garrison also secured the town of El Arish after the Ottoman garrison withdrew.

In August 1916, a combined Ottoman and German Empire Army had been forced to retreat to Bir el Abd, after the British victory in the Battle of Romani. During the following three months the defeated force retired further eastwards to El Arish, while the captured territory stretching from the Suez Canal was consolidated and garrisoned by the EEF. Patrols and reconnaissances were carried out by British forces, to protect the continuing construction of the railway and water pipeline and to deny passage across the Sinai desert to the Ottoman forces by destroying water cisterns and wells.

By December, construction of the infrastructure and supply lines had sufficiently progressed to enable the British advance to recommence, during the evening of 20 December. By the following morning a mounted force had reached El Arish to find it abandoned. An Ottoman Army garrison in a strong defensive position was located at Magdhaba, some 18–30 miles (29–48 km) inland to the south east, on the Wadi el Arish. After a second night march by the Anzac Mounted Division (Australian and New Zealand Mounted Division), the attack on Magdhaba was launched by Australian, British and New Zealand troops against well-entrenched Ottoman forces defending a series of six redoubts. During the day’s fierce fighting, the mounted infantry tactics of riding as close to the front line as possible and then dismounting to make their attack with the bayonet supported by artillery and machine guns prevailed, assisted by aircraft reconnaissances. All the well-camouflaged redoubts were eventually located and captured and the Ottoman defenders surrendered in the late afternoon.