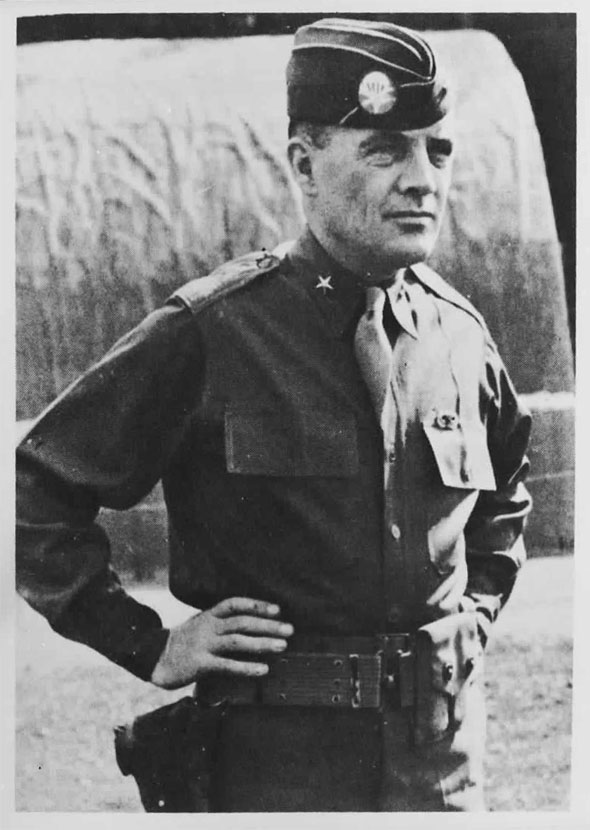 In December 1944, when the German army launched the surprise Battle of the Bulge, Major General Maxwell D. Taylor, commander of the 101st Airborne Division, was away, attending a staff conference in the United States. In Taylor’s absence, acting command of the 101st and its attached troops fell to McAuliffe. At Bastogne, the 101st was besieged by a far larger force of Germans under the command of General Heinrich Freiherr von Lüttwitz.

On December 22, 1944, through a party consisting of a major, a lieutenant, and two enlisted men under a flag of truce that entered the American lines southeast of Bastogne, General von Lüttwitz sent the following ultimatum to Gen. McAuliffe:

To the U.S.A. Commander of the encircled town of Bastogne.

The fortune of war is changing. This time the U.S.A. forces in and near Bastogne have been encircled by strong German armored units. More German armored units have crossed the river Our near Ortheuville, have taken Marche and reached St. Hubert by passing through Hompre-Sibret-Tillet. Libramont is in German hands.

There is only one possibility to save the encircled U.S.A. troops from total annihilation: that is the honorable surrender of the encircled town. In order to think it over a term of two hours will be granted beginning with the presentation of this note.

If this proposal should be rejected one German Artillery Corps and six heavy A. A. Battalions are ready to annihilate the U.S.A. troops in and near Bastogne. The order for firing will be given immediately after this two hours term.

All the serious civilian losses caused by this artillery fire would not correspond with the well-known American humanity.

According to various accounts from those present, when McAuliffe was given the German message, he read it, crumpled it into a ball, threw it in a wastepaper basket, and muttered, “Aw, nuts”. The officers in McAuliffe’s command post were trying and failing to come up with suitable language for an official reply when Lt. Col. Harry Kinnard suggested that McAuliffe’s first response summed up the situation pretty well, and the others agreed. The official reply was typed and delivered by Colonel Joseph Harper, commanding the 327th Glider Infantry, to the German delegation. It was as follows:

To the German Commander.

The German major appeared confused and asked Harper what the message meant. Harper said, “In plain English? Go to hell.” The choice of “Nuts!” rather than something earthier was typical for McAuliffe. Vincent Vicari, his personal aide at the time, recalled that “General Mac was the only general I ever knew who did not use profane language. ‘Nuts’ was part of his normal vocabulary.”