1862 – ACW: The Battle of Fredericksburg 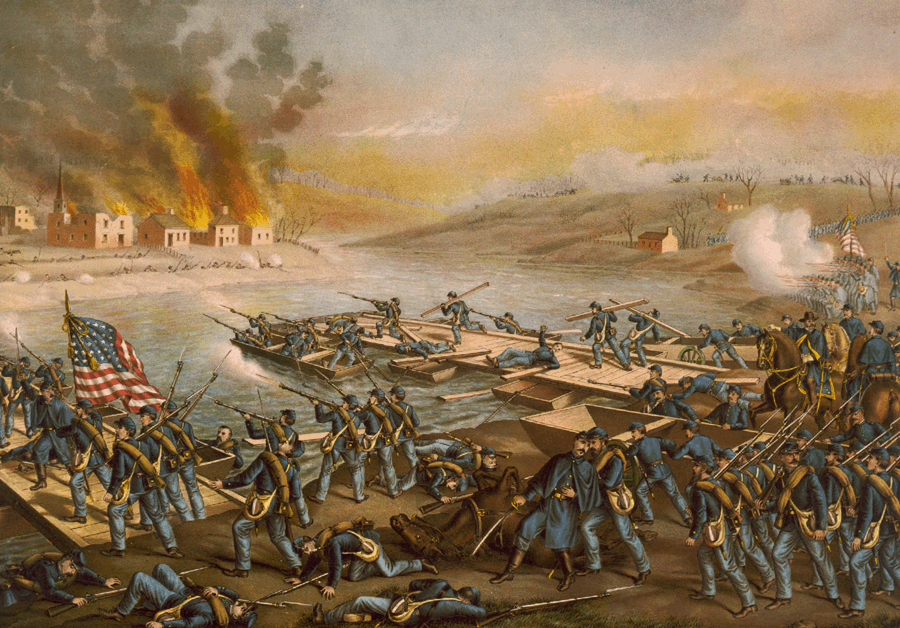 The Battle of Fredericksburg was fought in 1862, in and around Fredericksburg, Virginia, between General Robert E. Lee’s Confederate Army of Northern Virginia and the Union Army of the Potomac, commanded by Major General Ambrose Burnside.

The Union Army’s futile frontal attacks on this day in 1862 against entrenched Confederate defenders on the heights behind the city is remembered as one of the most one-sided battles of the American Civil War, with Union casualties more than twice as heavy as those suffered by the Confederates.

Burnside’s plan was to cross the Rappahannock River at Fredericksburg in mid-November and race to the Confederate capital of Richmond before Lee’s army could stop him. Bureaucratic delays prevented Burnside from receiving the necessary pontoon bridges in time and Lee moved his army to block the crossings. When the Union army was finally able to build its bridges and cross under fire, urban combat in the city resulted on the 11-12 December. Union troops prepared to assault Confederate defensive positions south of the city and on a strongly fortified ridge just west of the city known as Marye’s Heights.

On this day, the “grand division” of Maj. Gen. William B. Franklin was able to pierce the first defensive line of Confederate Lieutenant General Stonewall Jackson to the south, but was finally repulsed. Burnside ordered the grand divisions of Maj. Gens. Edwin V. Sumner and Joseph Hooker to make multiple frontal assaults against Lt. Gen. James Longstreet’s position on Marye’s Heights, all of which were repulsed with heavy losses. On 15 December, Burnside withdrew his army, ending another failed Union campaign in the Eastern Theater.