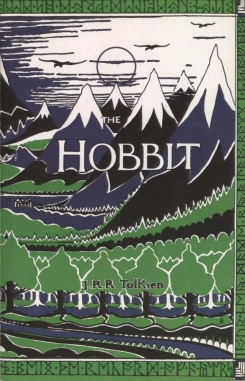 The Hobbit, or There and Back Again is a fantasy novel and children’s book by English author J. R. R. Tolkien. It was published on this day in 1937 to wide critical acclaim, being nominated for the Carnegie Medal and awarded a prize from the New York Herald Tribune for best juvenile fiction. The book remains popular and is recognized as a classic in children’s literature.

Set in a time “Between the Dawn of Færie and the Dominion of Men”, The Hobbit follows the quest of home-loving hobbit Bilbo Baggins to win a share of the treasure guarded by the dragon, Smaug. Bilbo’s journey takes him from light-hearted, rural surroundings into more sinister territory. The story is told in the form of an episodic quest, and most chapters introduce a specific creature, or type of creature, of Tolkien’s Wilderland. By accepting the disreputable, romantic, fey and adventurous sides of his nature and applying his wits and common sense, Bilbo gains a new level of maturity, competence and wisdom. The story reaches its climax in the Battle of the Five Armies, where many of the characters and creatures from earlier chapters re-emerge to engage in conflict.