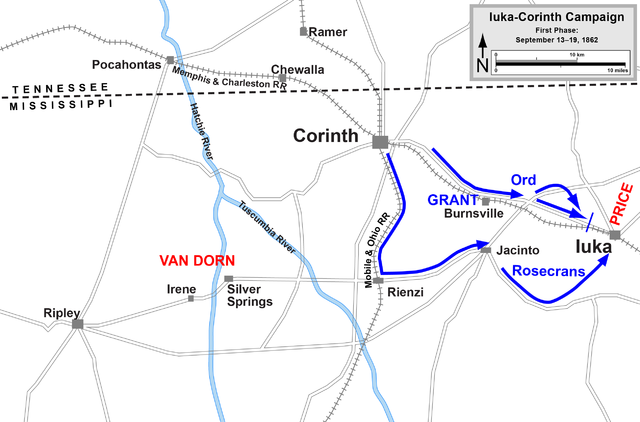 The Battle of Iuka was fought on 19 September 1862, in Iuka, Mississippi, during the American Civil War. In the opening battle of the Iuka-Corinth Campaign, Union Maj. Gen. William S. Rosecrans stopped the advance of the army of Confederate Maj. Gen. Sterling Price.

Maj. Gen. Ulysses S. Grant brought two armies to confront Price in a double envelopment: Rosecrans’s Army of the Mississippi, approaching Iuka from the southwest, and three divisions of his own Army of the Tennessee under Maj. Gen. Edward O. C. Ord, approaching from the northwest. Although Grant and Ord planned to attack in conjunction with Rosecrans when they heard the sound of battle, an acoustic shadow suppressed the sound and prevented them from realizing that the battle had begun. After an afternoon of fighting, entirely by Rosecrans’s men, the Confederates withdrew from Iuka on a road that had not been blocked by the Union army, marching to rendezvous with Confederate Maj. Gen. Earl Van Dorn, with whom they would soon fight the Second Battle of Corinth against Rosecrans.