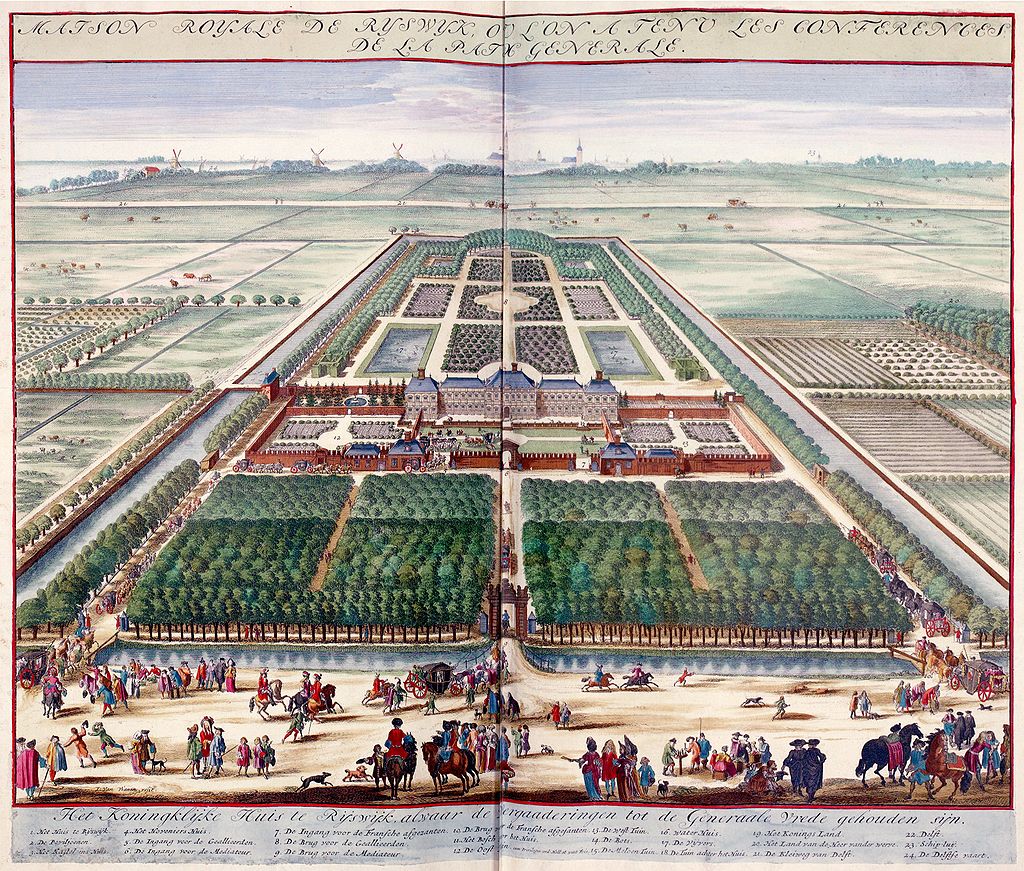 The Treaty of Ryswick was signed on this day in 1697 and named after Ryswick (now known as Rijswijk) in the Dutch Republic. The treaty settled the War of the League of Augsburg (Nine Years’ War), which pitted France against the Grand Alliance of England, Spain, the Holy Roman Empire and the United Provinces.

Negotiations started in May. The French representatives had their headquarters at The Hague and the allies were based in Delft: the conference taking place in between the two towns in the Huis ter Nieuwburg in Ryswick.

For the first few weeks no result was reached, so in June the two protagonists in the struggle, William III of Orange and Louis XIV of France, each appointed one representative to meet together privately. The two chosen were William Bentinck, Earl of Portland, and Marshal Boufflers, and they soon drew up the terms of an agreement, to which, however, the Holy Roman Emperor Leopold I and Charles II of Spain would not assent. But in a short time Spain gave way, and on 20 September a treaty of peace was signed between France and the three powers, England, Spain and the United Provinces. William then persuaded Leopold to make peace, and a treaty between France and the Holy Roman Empire was signed on the following 30 October.

The basis of the peace was that all towns and districts seized since the Treaty of Nijmegen (1679) should be restored. Then France surrendered Freiburg, Breisach and Philippsburg to the Holy Roman Empire, although it kept Strasbourg. On the other hand, it was granted Saint-Domingue (later to become Haiti) and regained Pondichéry (after paying the Dutch a large sum) and Acadia, while Spain recovered Catalonia, and the barrier fortresses of Mons, Luxembourg and Kortrijk. The Duchy of Lorraine, which for many years had been in the possession of France, was restored to Leopold Joseph, a son of Charles IV, Duke of Lorraine, and the Dutch were to be allowed to garrison some of the chief fortresses in the Spanish Netherlands, including Namur and Ypres. Louis undertook to recognize William III as king of England, and promised to give no further assistance to James II of England; he abandoned his interference in the electorate of Cologne and also the claim which he had put forward to some of the lands of the Electorate of the Palatinate.