Papua New Guinea gains independence from Australia on this day in 1975.

Papua New Guinea (PNG) officially the Independent State of Papua New Guinea, is an Oceanian country that occupies the eastern half of the island of New Guinea and its offshore islands in Melanesia, a region of the southwestern Pacific Ocean north of Australia. Its capital, located along its southeastern coast, is Port Moresby. PNG is notable for being one of the most corrupt countries in the world, suffering from high rates of lawlessness and has been labelled as potentially the worst place in the world for gender violence.The western half of New Guinea forms the Indonesian provinces of Papua and West Papua.*** 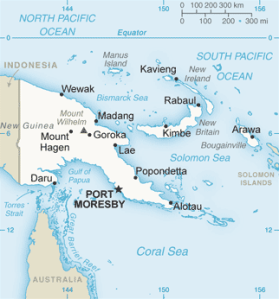 *** West Papua or Western New Guinea is a disputed territory illegally annexed by Indonesia from the Netherlands in 1969, which till then had been occupied by the Dutch. Since being forcibly annexed, the region has faced ongoing unrest led by indigenous separatist movements, resulting in the deaths of up to 500,000 native West Papuans.