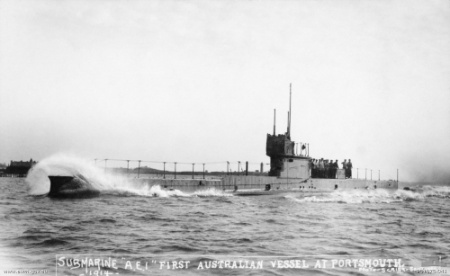 HMAS AE1 (originally known as just AE1) was an E-class submarine of the Royal Australian Navy (RAN). She was the first submarine to serve in the RAN, and was lost at sea with all hands near East New Britain, Papua New Guinea, on this day in 1914, after less than seven months in service.

At the outbreak of World War I, AE1, commanded by Lieutenant Commander Thomas Besant, RN, was sent to capture German New Guinea as part of the Australian Naval and Military Expeditionary Force. With her sister ship AE2, she took part in the operations leading to the occupation of the German territory, including the surrender of Rabaul on 13 September 1914.

At 07:00 on 14 September, AE1 departed Blanche Bay, Rabaul, to patrol off Cape Gazelle with HMAS Parramatta. When she had not returned by 20:00, several ships were dispatched to search for her. No trace of the submarine was ever found, and she was listed as lost with all hands. It is probable that she was wrecked on a reef or other submerged object. As well as Lieutenant Commander Besant, 2 other officers and 32 sailors were lost in this disaster. The disappearance was Australia’s first major loss of World War I.