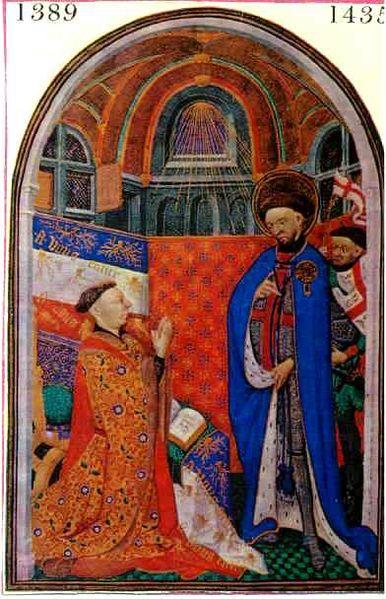 John of Lancaster, 1st Duke of Bedford born 20 June 1389 died on this day in 1435. He was the third surviving son of King Henry IV of England by Mary de Bohun, brother to King Henry V, and acted as regent of France for his nephew, King Henry VI.

After his father’s accession to the throne of England as Henry IV, John of Lancaster began to accumulate lands and lucrative offices. He was knighted on 12 October 1399 at his father’s coronation and made a Knight of the Garter by 1402. Between 1403 and 1405 grants of forfeited lands such as from the House of Percy, considerably increased his income. He was appointed master of the mews and falcons in 1402, Constable of England in 1403 and Warden of the East March from 1403 to 1414. He was created Earl of Kendal, Earl of Richmond and Duke of Bedford in 1414 by his brother, King Henry V.

When Henry V died in 1422, Bedford vied with his younger brother, Humphrey, Duke of Gloucester, for control of the Kingdom. Bedford was declared Regent but focused on the ongoing war in France, while during his absence, Gloucester acted as Lord Protector of England. Bedford defeated the French several times, most notably at the Battle of Verneuil, until the arrival of Joan of Arc rallied the opposition. In 1431, Bedford had Joan tried and executed at Rouen, then arranged a coronation for the young Henry VI at Paris.

John died during the Congress of Arras at his Castle of Joyeux Repos in Rouen and was buried at Rouen Cathedral. He had no legitimate surviving issue.