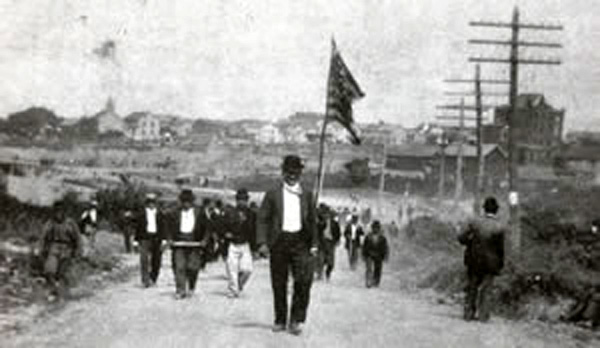 The Lattimer massacre was the violent deaths of 19 unarmed striking immigrant coal miners at the Lattimer mine near Hazleton, Pennsylvania, on this day in 1897. The miners, mostly of Polish, Slovak, Lithuanian and German ethnicity, were shot and killed by a Luzerne County sheriff’s posse. Scores more workers were wounded. The massacre was a turning point in the history of the United Mine Workers (UMW).

When the demonstrators reached Lattimer at 3:45 PM, they were met again by the sheriff and 150 armed deputies. Sheriff Martin ordered the marchers to disperse, and then attempted to grab an American flag out of the hands of the lead marcher. A scuffle ensued, and the police opened fire on the unarmed crowd. Nineteen miners died, and anywhere from 17 to 49 others wounded. All had been shot in the back, and several had multiple gunshot wounds which indicated that they had been targeted by the deputies.

Sheriff Martin and 73 deputies were arrested and put on trial. At trial, the defendants claimed that the marchers had refused to obey an order to disperse and were charging toward the sheriff and his deputies. Further medical evidence showed that nearly all the strikers had been shot in the back. Nonetheless, the sheriff and his deputies were acquitted.

The Lattimer massacre was a turning point in the history of the United Mine Workers. The UMW, struggling to establish itself in Pennsylvania’s coal mines, witnessed a dramatic upsurge of more than 10,000 new members. Just three years later, the union would be powerful enough to win very large wage increases and significant safety improvements for miners throughout the region.